A hot September night and some cool jazz, plus wine, hors d'oeuvres and fabulous opportunity baskets in the beautiful Library garden, provided the right setting for Jazz at the Garden II to raise just over $10,000 to support the Murrieta Public Library’s collections and programs for the community.

The Murrieta Public Library Foundation and the Friends of the Murrieta Library hosted the concert and reception.

City Councilmember Rick Gibbs was on hand to pay tribute to the evening’s honorees, Shirley and Fred Grimes, who contributed much to the development and growth of the City of Murrieta, and were major contributors to the construction of the Children’s Reading Room and the Heritage Room in the Library. Since the 2007 opening of the Library, both areas have been in constant use by children and their parents in the Children’s Reading Room and students of local history in the Heritage Room.

Jazz ensemble, Hart and Soul with Friends, performed to an appreciative audience. Jennifer Hart, vocalist, and Llew Matthews, pianist-arranger-composer, returned to this event for the second year by popular request, and brought with them Benjamin May, bass player, and Bob Forte, drummer. The group kept toes tapping and heads nodding in time with the music throughout the evening.

Murrieta Public Library Foundation President Juanita Blankenship, and Friends of the Murrieta Library President Luanne Ferrer agreed that Murrieta is fortunate to have its wonderful and well-used Library, and that it is gratifying to see the community join together to support its many services to the community.

Click on this box if you would like to view ALL 258 PICTURES from the Jazz at the Garden II Event. By doing so, you will be redirected to the Murrieta Public Library Foundation website where you can view and even save ALL of the photos taken at this event.

The theme for the Friends of the Murrieta Library’s 2nd prize entry in the 2012 Holiday Push Cart Parade was “Charlie Brown’s White Christmas”. Charlie Brown’s back yard featured Snoopy and his doghouse built by Ed Van Dorn. The yard was fenced by a handsome picket fence and festooned in lighted garlands of pine boughs with pine cones. Charlie Brown graced the front of the float with his sad little Christmas tree that was cut from a Carson Ranch pine. Six smaller Charlie Brown trees were stationed 3 on each side of the float. Books, snow, two large side wooden trees and lights finished the scene.

A total of 14 people participated in the Friends’ entry in the Push Cart Parade. Seven members planned and decorated the float. We had one planning session on November 5th and two scheduled workdays, thereafter. However, Ed Van Dorn spent many more work days in Carol Carson’s barn and at his home making sure that all of the lights, the snow and all of the decorations were in place and secure. The other float workers were: Carol Van Dorn, Carol Carson, Judy Call, Loretta McKinney, Ruth Zepeda, and Lela Llorens.

In addition to our thanks to all of the float and parade participants, the Friends wish to especially thank the Home Depot for a generous donation for materials to build Snoopy’s dog house and the fence and to the Corner Store for the many books used to decorate the float. 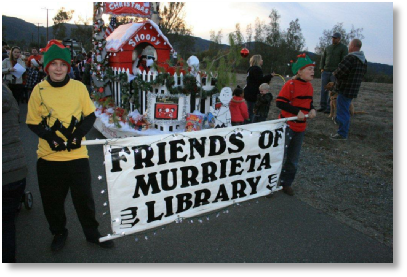 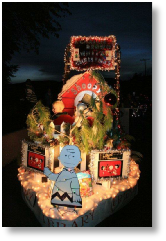 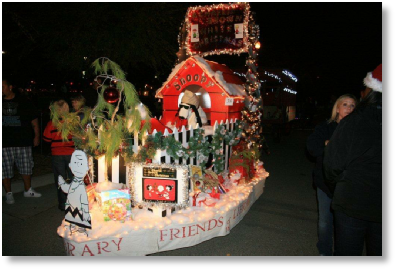 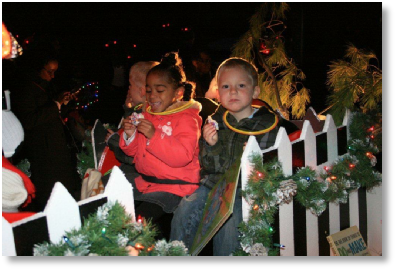 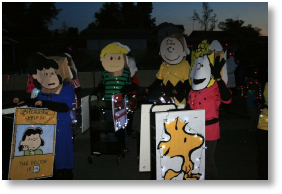 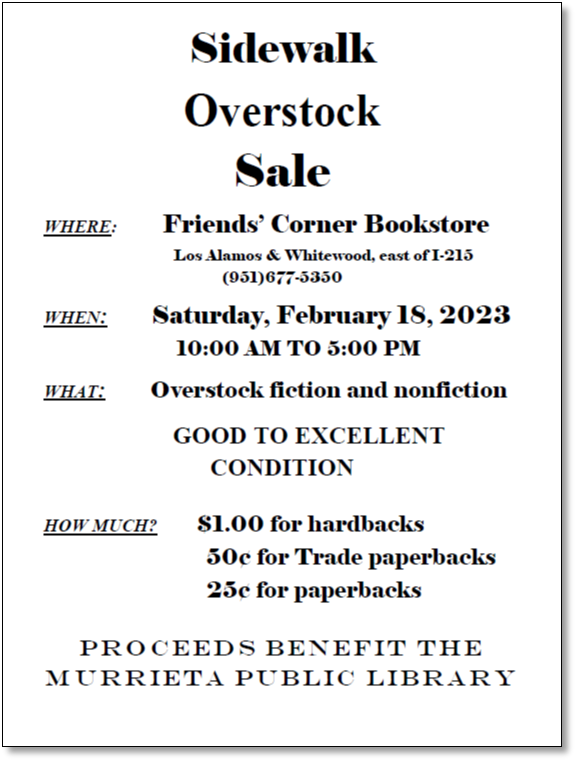